Official Unveiling With Honors to be Held May 8, 2019

America’s Freedom Bell to be officially unveiled at the Veterans Museum, its new permanent home This celebratory occasion is in honor of the first public home of “America’s Freedom Bell” since the bell was cast on June 6, 2013, to “Honor Our Armed Forces Past, Present and Future.” Created to allow every American the opportunity to ring the bell to honor those who have served our nation, it has since travelled widely to Independence Hall, Arlington Cemetery, Pearl Harbor, Normandy Beach, and many other sites on national holidays and historically significant dates, but San Diego will be its first permanent home. Since its inception, over 5 million Americans have rung it to honor a family member or friend.

Additionally, the Spirit of Liberty Foundation and The Veterans Museum at Balboa Park are proud to announce “America’s Patriotic Honor Roll.” It is the first time and only place where every veteran, 156 million since 1776, can be honored in perpetuity.

State of the City Address 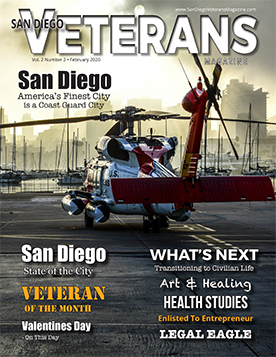